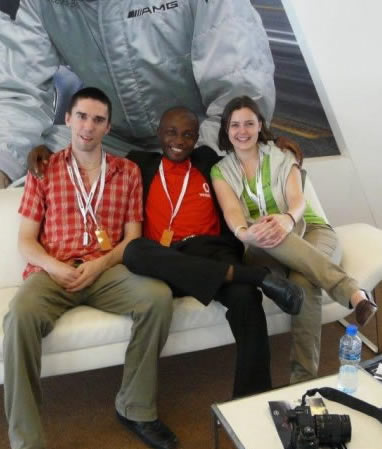 Originally trained as a medic, but decided to swap the comfort of the consulting room and operating theatres for the exciting but uncharted territory of owning a business(es), in the final few months of a 7yr med school programme at KATH-KNUST, after an initial one year stint at University of Ghana pursuing biological science.

I have been through 'hell' and back, which I reveal more in my book: 'The 10yr+ Overnight Success'.

Side Gigs
Started off on my university campus hosting and designing websites, repairing laptops, fixing vsat, linux/squid server setups(w/wo wifi hotspot captive portals), providing small student loans on campus (sometimes secured against qualified textbooks), trading forex, building and selling desktop computers, operating airline ticket sales via a travel & tour business, owned two cybercafes in Kumasi alone (after an earlier one in I owned with four others in Koforidua never grew to my desire due to pesistent disagreements over so many things), etc).


Epiphanies
Most of the businesses I have started have all been on the back of being at the receiving end of very bitter experience or simply short-change. I have several to share, but will restrict it to a few....

My inability to get a guarantor for a ssnit student loan moved me to have some part-time businesses even whilst on campus, and used the surplus funds to setup a non-deposit taking small loans for students, which has now grown to be Sikamaster Loans and Quidmaster Loans, in Ghana and the UK respectively - both even funding partners for this platform.

Most landlords in Ghana get away with plain fraud & deceit. My horrible unfair treatment lead me to start a property business -- DCANS Properties was borne out of such painful experiences, with related rental outfits in Rent Now Pay Later (a burgening assault on rent advance) and Rent to Buy Ghana (the first real actionable attempt at promoting home ownership in a low-income country), aside provide respite for landowners stuck with their building via Build Now Pay Later.

The idea of Moneyafrique, DCANS Pay and Quid Pay were planned from my Fairmont Hotel Abu Dhabi room when I got stranded with settling bills, very far away from home.


The DCANS Group Limited (TDG)
The DCANS Group registered in England & Wales is a global outfit with local presence in Europe, Asia-Pacific and Africa. The group is uniquely owned via a family office.